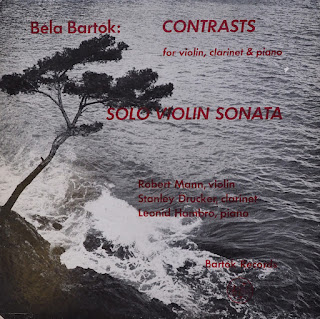 Here is the first recording of Bartok's Solo Sonata for Violin with the original last movement quarter-tones.  (Menuhin, who commissioned it, of course made the first recording, but it included changes to the original score.)  It is important for that alone, but it is much more, a brilliant performance of a great, late piece by Bartok.  The Constrasts, with Stanley Drucker and Leonid Hambro is one of the best performances I've heard, and with much better sound than Bartok's own recording with Benny Goodman and Szigeti. I have no personal need to look further than those two recordings, though, lover of Bartok that I am, I have others.

The recording was undertaken by Bartok records under the direction of  Bela Bartok's son, Peter. and they are masterfully recorded. I had a very clean LP to transfer using the Shure V15  V-MR. It only required a little declicking and very very little surface vibration removal.  The renovated file sound good, but adds nothing to the surprisingly full bodied, detailed,  and focused sound of the original from 1949.  Peter Bartok was a sound engineer, and quite a good one to go by this and several other Bartok Records productions.

I've included the record jacket notes, separating the three text columns into 3 jpegs for easier reading. I only take issue to the opening line of the text, which asserts that, "Bartok could not, with any accuracy, be classified as a 'modern' composer in the conventional sense of the term."  While it is true that Bartok is deeply influenced by classic forms and folk music, his application of those influences places him squarely in 20th century modernism.  The Solo Violin Sonata is "Bachian", but could by no means be mistaken for Bach. The third and forth string quartets have deep classical formal roots, and yet could not have been written other than the time they were composed, nor by anyone but Bartok. Denying him his place in the pantheon of great moderns is simply misguided, even if he mostly has a place among the  greatest of the greats of all time.

Links to all the files, Flac, MP3, and album and CD art, can be found here:

Posted by Lawrence Austin at 3:45 PM