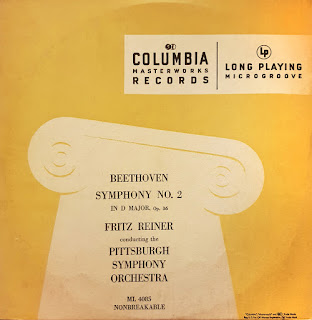 Once again I am working with a well worn LP with some outer groove problems. The performance is nonetheless worth listening through that. I believe the performance may have been reissued on CD in a boxed set, probably in better sound than I've been able to achieve.

The performance has a bit more nervous impulse than I sometimes like in Beethoven, but it is exciting and Reiner's drive doesn't exhibit Toscanini's manic neurosis.

The cover art art includes the Iberia with Reiner and the PSO, since my personal CD combined them. As that is something I have also put on the blog I left it as is. 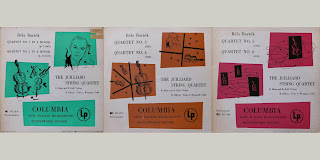 The Juilliard 1963 recording of the Bartok quartets has always been the gold standard of these works for me, and still is.  I'm afraid my response to the earlier recorded performances was rather, "very nice, but can we get to the '63 set now".  It was an injustice to these very fine performances.  If the technical command of these works had been perfected in the intervening years, and if, indeed, "THE" Juilliard for me are the various formations with Robert Mann and Claus Adam, the earlier group, with founding members of the Juillard Arthur Winograd on cello and Robert Koff as 2nd violin,  inscribed a committed and passionate performance of the six quartets to records.  The  fourth quartet has never been so accessible to me.
The sound is not bad, although my records are original early 1950's pressings and they were well used before I got them.  The very outermost grooves of the first and second quartet were challenging to deal with. I think the distortion from groove damage has been minimized to acceptable levels in the renovation.  The best sounding of the set are 3-6, though I think 1-3 are perfectly acceptable given that they were taken from well used 70 year old records.  I haven't listened to the Pristine Classical renovation of these recordings, though they usually do a good job, even if sometimes things can sound a bit souped up. If you're interested in the recordings, why not give these renovations a listen. If you like the performances but not the sound, Pristine Classical will be available. I'm guessing they had cleaner sources than I, but as always any comments on the sound would help to improve my practices.
The tracks have been numbered for 3 CD's as indicated on the notes provided with the linked material.
The folder with all files for the six quartets is here:
https://www.mediafire.com/folder/r2sx09lfuwh88/
Posted by Lawrence Austin at 2:45 PM 10 comments: 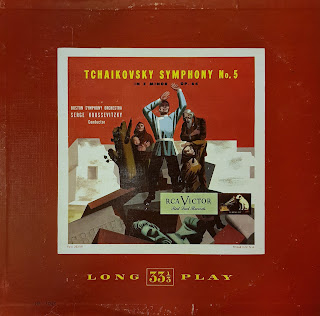 A treasured old LP of Koussevitsky's great reading of the Tchaikovsky Fifth Symphony with the Boston Symphony Orchestra at its finest.  What seem like liberties with tempo today were par for the course at the time, and I think the maestros  little ritards before all hell breaks loose are musical and justified. This an exciting Tchaikovsky 5th in a conception that is the polar opposite of, say, Hans Rosbaud, to mention another performance I like a lot for different reasons.  Buckle your seatbelts; it's going to be a thrilling ride:
http://www.mediafire.com/folder/cnovyh3luwcsy/Tchaikovsky%205th%20Symphony%20Koussevitsky%20BSO%201944
Posted by Lawrence Austin at 7:36 PM 4 comments:

Sibelius Symphony No. 2 Barbirolli and the Halle Orchestra RCA Bluebird 1084

It has been some time since I have done much in the way of transferring LP's to a digital format, mostly, but not entirely because my desktop computer with a decent sound card was not longer working. My hearing has become increasingly compromised since I last offered a restoration. I new Dell XPS desktop, EVGA Nu Audio sound card, Beyerdynamic DT 770 Pro headphones (250 ohm), and Elac Uni Fi UB5 speakers, along with some re-programmned hearing aids, have inspired me to try again. I apologize if I've missed the mark in terms of sound.The hearing loss is a challenge I'd rather have avoided, but it runs in the family, so I'm not surprised.  Since I am trying to produce transfers I can share, any feedback would be welcome.  Here is a long time favorite of mine, Barbirolli's early LP issue on RCA Bluebird of the Sibelius second symphony. 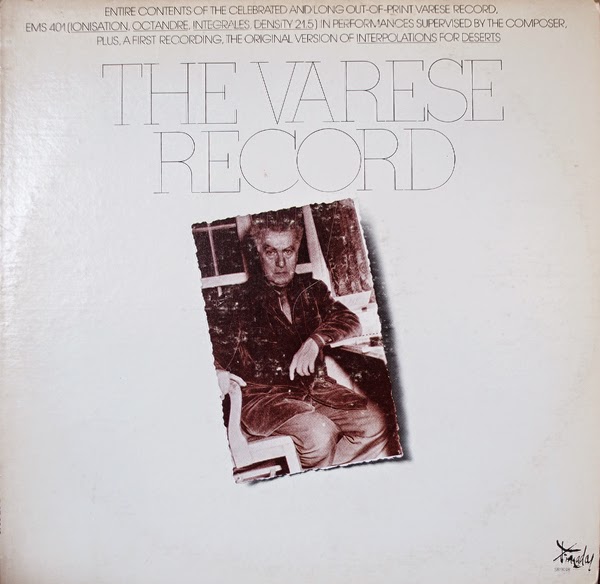 If this recording has made it to CD, I can't find it. I find a lot of LP, like the one I have, of the reissue on Finnadar Records (SR9018) of the original 1950 record, with the added 1954 Interpolations for Désert, but I have not located a CD.

The pieces are available, but this recording under the supervision of Varèse has unique historical value, since the 1950 record was for long the only recorded music of this composer available.

The Interpolations for Désert were substantially revised in 1961, but these versions from 1954 are what Hermann Scherchen premiered in Paris on December 2nd of that year. What a night that must have been!

The music is wonderful, and the record itself contains "a reminiscence and appreciation" of Varèse by Frank Zappa, entitled: Edgard Varèse: Idol of my youth.  Links to the photos of the cover are included, in case you wish to read it.

Flac 96Khz : https://www.mediafire.com/?zay5965jibk4n5a
The original 24 bit .wav files had a bit rate of 4608 kbps, but the Flac files, converted in Audacity, have a bit rate of 1085 kbps.  It will have to do until I can figure out what is going on.  It may well be I'm simply clueless, but I'll try to find out.  It may well be that I simply do not understand the mechanics of lossless compression.  Well, I mean I don't. Meanwhile,  these flac files sound pretty good to me.

The CD set of Schneider Quartet recordings of the Haydn String Quartets has been issued by Music and Arts and is now available for purchase through Music and Arts itself, or through Amazon.  I was made aware of this by Jonathan Angel, who I heartily thank for his email informing me of it.  His review of the set on Amazon.com just about says it all.

Although my restorations of the files were not used at the end of the day, I take some satisfaction in the fact that the project was started when the late Fred Maroth contacted me after seeing the postings of them on Vinyl Fatigue, and asked me to take on the project.  I was in over my head, but I'm very happy the the project was brought to completion by others.The digital restorations by Lani Spahr published in the CD set are an improvement over what I was able to do, and I would urge anyone who loves these recordings to get the CD's.  The original recordings were not state of the art for their time, nor were the recorded results consistent across the series. Those limitations are carried into the present, of course, but the performances themselves shine through any sonic limitations, and Lani Spahr has done a good job with what was available to work with. A job well done, and some of the most important and wonderful recordings ever made once again seeing the light of day.

Those of us who love these performances love them without reservation.  This is Haydn the way I want to hear it, with all the humor, tenderness, aristocratic refinement and  country bawdiness the music contains. There are slow movements here played with a the delicacy and awareness of suffering that can make you weep. And Haydn is one of the few composers who moves me to delighted laughter. 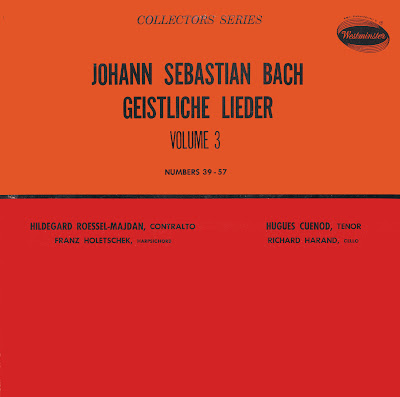 Here is the next installment, volume 3 in the ongoing Bach Geistliche Leider with Hugues Cuenod and Hilde Roessel-Majdan.

I changed preamps between this post and the last, volume 2. There is some improvement, I think, although I hope it is not so drastic as to spoil the four renovations as a "set". I will compare the discs I have burned, and if I think it is a problem, I will redo the first two, though I do not promise that any time soon. They all sound pretty good, though, even if they end up not being an exact match.

Link to all files