Beecham conducts Sibelius Symphonies No. 2 and No. 4 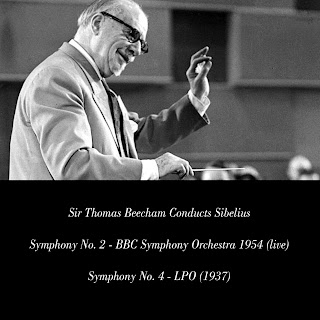 I'm pleased to be able to offer these two performances of Sibelius by Beecham. They are available on CD, the Second Symphony in the BBC series of historical broadcast performances, the Fourth on Naxos, but with copyright restrictions preventing its release in the U.S. The coupling here is not to my knowledge among the compilations available commercially.

The Second Symphony recording is a live performance with the BBC Symphony Orchestra from October 10, 1951. It has the usual coughs and throat clearings one would expect at an event during a British autumn, but they are not really distracting or very prominent. The sonic quality of the original recording has some problems, distortion in loud passages and the usual, run of the mill difficulties from live performance in the golden past. Given the excitement of the reading, they are a minor matter, hardly noticed through engagement with the music. This is even better than Sir Thomas' studio recordings, in themselves quite wonderful. Beecham's approach to Sibelius is more sinewy, more classical, less lushly romantic than that (usually) of conductors like Ormandy or Barbirolli. I like both kinds of Sibelius, and from any point of view, Beecham is a masterful conductor of this composer.

The Fourth Symphony was an early recording done for the Sibelius Society after it became clear that the successor to Robert Kajanus at the helm of the Helsinki Philharmonic, Georg Schnéevoigt, had very different ideas of the Symphony than those of its composer. Be that as it may, this recording by Beecham was for long considered the point of reference for recorded performances of the work, a position that not everyone feels it has definitively yielded.
If Sibelius, in his irritable last years, said unkind things about Beecham's performance, in favor of that of the twice Nazified Herbert von Karajan, he was nonetheless enthusiastic about it at the time it was made. Much like Sir Thomas, Professor Sibelius could be a prickly character; and as his performance suggestions for various works did not at all remain consistent over time, while simple matters like metronome markings were not always published at places in the score where he later expressed indignation that they were not followed, one can be forgiven for finding several different solutions to the same problem equally satisfying in general musical terms.

The slight "thumps" in the last measures of the 4th symphony were apparently on the source 78s. I have more than one copy of the LP my recording was made from, and they were on all of them.

Link to all FLAC and MP3 files
Posted by Lawrence Austin at 7:19 PM